“Jocasta Innes really knows her stuff …
an author to place your trust in, wholeheartedly.”
Hugh Fearnley-Whittingstall 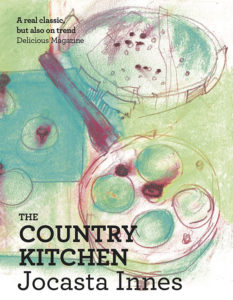 ‘Everyone has a picture of how a country kitchen should look … it’s a phrase as clustered with associations as a bramble with fruit. Usually it is an old settled place which comes to mind: a flagged floor smoothed into hollows by the passage of countless feet, vast plank table scoured to pale straw colour, round-faced clock companionably ticking  and set into the chimney breast, and that tyrant of the old style country kitchen, the cast iron range whose needs, moods and eccentricities must be faithfully served if bread is not to scorch and kettles refuse to boil.’

So Jocasta Innes begins her love-song to all things food and countryside, The Country Kitchen, which remained her favourite of all the books she ever wrote, from The Pauper’s Cookbook to Paint Magic. Just as Patience Gray’s Honey from a Weed illuminates the Mediterranean, The Country Kitchen encapsulates the tastes and seasons of the north, exploring British traditions of preserving and cooking from the larder to the hob. Jocasta guides her readers through how to brine and bottle, brew, pickle and smoke, how to make cheese and sausage, chutneys and jams. Accompanied by more than 200 traditional and unexpected recipes, it’s a self-help guide to the Good Life.

Spring, Jocasta writes, sweeps the countryside like a green fire, puffs of white blossom rising behind like smoke…

First issued in 1979, and now revised and redesigned with Stewart Walton’s original illustrations, The Country Kitchen has been memorably described by Delicious Magazine as ‘a real classic, but also on trend.’

“A real classic, but also on trend”
Delicious Magazine

Jocasta Innes’s Paint Magic demystified the secrets of home decoration, and went on to sell over a million copies. As Cosmopolitan’s decoration guru, and in her books and TV shows, her practical and inspiring approach endeared her to a whole generation of home-makers.

Jocasta’s roots, though, were in cookery writing, with the delicious, unfussy recipes from the bestselling The Pauper’s Cookbook, a guide to eating on a shoestring. She followed it with The Country Kitchen, her own favourite, the fruit of her years living in Dorset, by the sea.