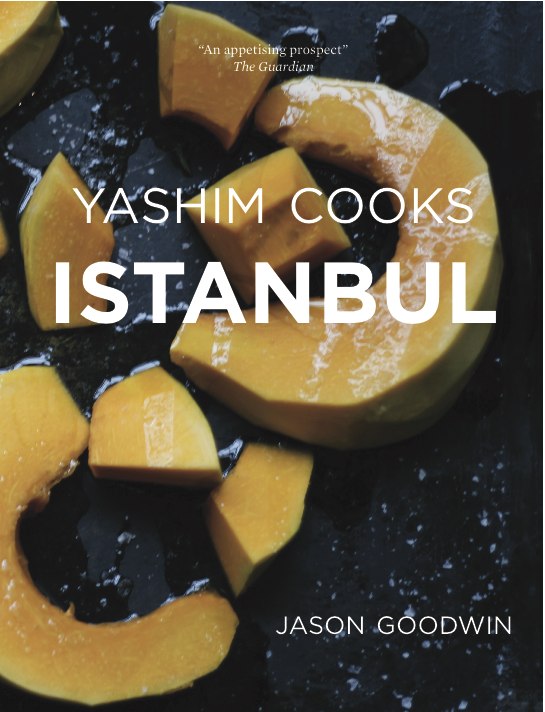 It began when readers started asking for Jason’s sleuth’s recipes… The Ottoman series began with The Janissary Tree, winner of the Mystery Writers of America’s Edgar Award for Best Novel (2007). The five books in the series have sold over a quarter of a million copies and have been translated into over 40 languages.

Food is at the heart of the books. In each of the novels Yashim, the detective, goes into the markets and the kitchen to bring nineteenth century Istanbul to life. Readers and reviewers have responded enthusiastically, on both sides of the Atlantic, and called for the cook book: ‘A Yashim cook book would be an appetising prospect.’ The Guardian. ‘The descriptions…made me drool.’ The Independent.’ Mouth watering…’ The Washington Post.

YASHIM COOKS ISTANBUL has appealed to food-lovers and home cooks, evoking the colours and flavours of the Ottoman world, with recipes from simple meze and vegetable dishes to meat, fish, and puddings.

Meanwhile, Argonaut Books will send a signed copy of the cookbook, postage free, anywhere in the world – just order using the side bar to the right.

Shortlisted for Guild of Food Writers’ First Book Award 2017
Jurors commented: ‘A highly unusual book, which blends fiction with recipes and whisks you away to this exotic world as though on a magic carpet ride. Evocative, captivating and a treat to read – a book that breaks new ground in the field of cookery writing.’

‘Yashim the Ottoman detective is a fictional character in Jason Goodwin’s mystery series set in Ottoman-era Istanbul, and food looms large in all five books. The genius of Yashim Cooks Istanbul is how it intertwines brilliant recipes with food-centric passages and nuggets of culture.’ Delicious Magazine

‘Pull up an armchair, whack up the central heating, pour yourself a nip of raki and settle down for a touch of armchair gastronomy with Ottoman historian and master storyteller Jason Goodwin’s Yashim Cooks Istanbul. … Devotees of the author’s mystery novels, set in and around the Topkapi Palace in the 1840s, will recognise the hero of The Janissary Tree. Yashim…is a serious cook. Yashim’s appreciation of Istanbul’s street food is recorded in the novels through lyrical descriptions of simmering meatballs, birds turning on the spit and fish grilled by the quayside… Such stories serve as introductions to what is in essence a practical cookbook. The recipes are illuminated by images of life n the golden city, then and now, along with atmospheric photos of the dishes as prepared in the author’s kitchen in Dorset. There are clear instructions on unusual processes (boning out a mackerel, rolling a filo-pastry cigar) plus suggestions for substitute ingredients where these are not immediately to hand on non-Ottoman shelves.’ Elisabeth Luard, The Oldie

‘I was first seduced by the look of the book, with its maps of 19th-century Istanbul, its photos of succulent veg and prints of turbanned Turks going about their Oriental business.. Then there’s the author’s charm…Having been half won over, I then found that lots of the recipes were easy and delicious, even if you live far from the kind of shop that sells pul biber. The baked lamb steaks will henceforth be a staple in my kitchen, along with the coriander chicken with lemon and sumac, and the hummus is the best ever. I;, going to try Palace Fig Pudding next, stuffing walnuts into dried figs with a cinnamon syrup, and I’m drooling already.’ Helena Drysdale, Country Life Magazine

‘An enticing cookbook of the wonderful dishes from Ottoman times. Yashim, the Ottoman investigator, is also skilled in the kitchen. He would prepare the dishes featured in this entertaining and encompassing cookbook that also contains beautiful photography and illustrations as well as excerpts from books in the series.’ Leyla Yvonne Ergil, Daily Sabah

‘One of the delights of Goodwin’s series of mysteries set in 19th-century Istanbul was the culinary prowess of his detective. This handsome collection of recipes is accompanied by excerpts from the novels that inspired it.’ The New York Times

‘Jason Goodwin writes the terrific Yashim detective series, about an intrepid sleuth chasing mysteries in 19th century Istanbul. To help him think — and because a man needs to eat — Investigator Yashim Togalu cooks while he puzzles over clues. The books are filled with scenes where Yashim is busily chopping garlic, drizzling olive oil and sauteing aubergines. Apparently, I’m not the only one who got hungry while reading: So many readers clamored for the recipes that Goodwin finally collected them in this glossy volume. And, really, how can you resist a cookbook that includes recipes for Assassin’s Steak Tartare, Sultan’s Ramadan Eggs and Ladies’ Thighs?’ Mary Louise Kelly, National Security correspondent: NPR’s Book Concierge

‘I’ve been looking forward to the publication of Jason Goodwin’s cookbook Yashim Cooks Istanbul and it measures up to all my expectations…The recipes have been chosen with care. Many, exotic and flavourful, are also satisfyingly simple – bean salad, the sultan’s Ramadan eggs, the kebab of Pilgrim Osman – anyone might cook these dishes – but the ideas are creative and different. Other recipes are more elegant, a sure talking point at any celebration; guinea fowl with pepper sauce, for example, or Palace fig pudding…Visually the book is gorgeous, but not in an over-glossy unnatural kind of way. As well as being a respected author Jason Goodwin is also an astonishingly good food photographer (it doesn’t seem fair), but the pages of this beautifully presented book are further interspersed with illustrations from various manuscripts and a variety of other sources and there are older images from the author’s own family archives which give the book an authenticity which is both lively and charming. A perfect foodie present….I have just bought six for half a dozen lucky friends!’ Saucy Dressings blog

‘Yashim is the sultan’s investigator in Ottoman Istanbul, the hero of five adventures by the writer Jason Goodwin. Yashim (like Goodwin) is a keen cook and this recipe…was a huge success.’ Lindsey Bareham’s Dinner Tonight, The Times